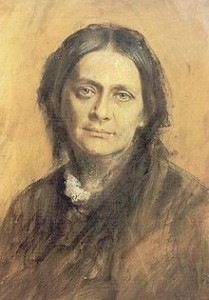 Clara Josephine née Wieck Schumann (1819-1896) was one of the foremost pianists of the 19th century and the wife of Robert Schumann. She was also a respected composer and influential teacher. Clara was the daughter of Friedrich Wieck, an eminent piano teacher. After an affair between Clara’s mother and one of her father’s students, her parents divorced in 1824. Five-year-old Clara remained with her father. Her mother moved to Berlin. Contact with Clara was maintained through correspondence. Although Clara’s general education was meager, her musical education was superb. She studied piano with Wieck, theory and composition with the best teachers in Leipzig. She attended every important concert.

In a letter of 1894, she wrote: “My father had to put up with being called a tyrant; however, I still thank him for it every day. It was also a blessing for me that he was exceedingly strict, that he reprimanded me when I deserved it and in so doing, prevented me from becoming arrogant from the praise the world showered on me. At times the rebuke was bitter, but it was still good for me!”

A turning point came when Clara and Robert Schumann fell in love. Fearing that her marriage to an impecunious composer would destroy the plans he had for her music career, her father opposed their union in every way he could. He threatened to shoot Robert. Because Clara was not yet of age, her father’s consent was required before they could marry. Following a court battle with her father, Clara Wieck and Robert Schumann wed in 1840, the day before Clara’s 21st birthday.

She had known him since childhood. At that time Schumann was not a well-known composer while she was already a pianist with an international reputation. Between 1841 and 1854 they had eight children. Clara carried on performing, composing and teaching. Her husband’s growing mental illness had been a cause for concern for many years. He attempted suicide in 1854 and was hospitalized with tertiary syphilis. His doctors forbade Clara to visit him. He died in 1856.

Until her marriage Clara maintained a detailed diary. The day after the wedding she made the final entry “Now a new life is beginning, a beautiful life, a life in which love for him is greater than all else, but difficult duties are nearing as well. Heaven grant me the strength to fulfill them faithfully, as a good wife should. He has always stood by me and always will. I have always had great faith in God and will preserve that faith forever.”

After her husband’s death, Clara resumed her concert tours to support her children. She was a solemn ‘priestess’ of the art. Dressed in black, she devoted herself to her husband’s memory and music. The marriage of Robert and Clara Schumann had been a rare partnership. They studied scores together and read poetry for possible musical settings. She acted as rehearsal pianist for groups he conducted. Clara Schumann’s life was one of musical triumph and personal tragedy.

The divorce of her parents, loss of her mother, the bitter struggle with her father and the death of her husband made their mark on her. She supported her children and grandchildren by her earnings and worked unceasingly. The Schumanns met Brahms shortly before Robert’s hospitalization and he became a lifelong, devoted friend. She helped advance his career by playing his works when he was young and unknown and he – who was very much in love with her, in turn assisted her with decisions on family, career, composing and editing throughout her life.

The composer-pianist was an accepted phenomenon in the early 19th century. In her first solo concert, 11-year-old Clara Wieck played a composition of her own. Beginning in 1831 her works were published and favorably reviewed. In the use of bold harmonies, adventurous modulations, rhythmic freedom and the genres she chose, her compositions reflect the advanced tendencies of their day. After her marriage her compositional style changed. She was maturing as an artist and their joint studies influenced her work. She turned, as Robert Schumann had, to songs. Some were presented to her husband on their first Christmas together. All her lieder, including some until recently unpublished, are expressive and powerful contributions to the genre.

Robert Schumann had encouraged his wife’s composition. She ceased composing after his death. The fact that she wanted to support her children and grandchildren by performing was obviously an important choice of her own. After her death her compositions were generally ignored. Interest was revived in the 1970s when the first recordings began to appear. Since that time the discography of her works has grown to over 100 recordings. Editions of published and previously unpublished pieces have appeared

The song Mein Stern was composed in June 1846. The Schumanns spent that month at the estate of Friedrich Serre auf Maxen near Dresden. He and his wife Friederike had known Clara since childhood. They lent Schumann encouragement in his romance, despite being close friends of her father. The text is by Friederike. The first edition appeared in London in 1846 as O thou my star with an English translation by Clara de Pontigny. The first critical edition was published in 1983. It is a strophic song of predictable charm written to sentimental verses

Abendfeyer in Venedig for chorus of mixed voices was composed in June 1848. It is one of three choral settings Clara made of poems by Emanuel von Geibel. He was the leading German lyric poet between the revolution of 1848 and the establishment of the Empire in 1871. Geibel is still known for his popular love-songs. She composed it for the Dresdener Chorgesangverein conducted by Robert, for which she was the accompanist. She secretly rehearsed these choruses to surprise him on his birthday. Never performed publicly, they were first published in 1989.