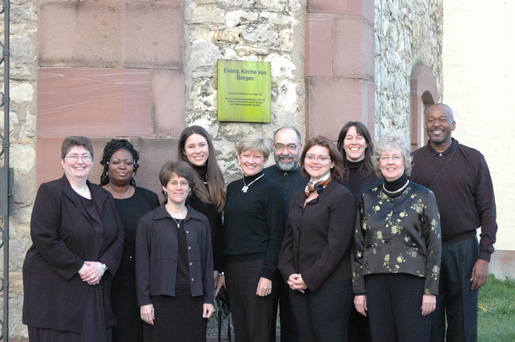 “Their performance was as polished in style as it was distinctive in theme.” Joseph McClellan Washington Post

“…The concert of the American choir in the Protestant church of Bergen-Eckheim surprised us with its variety. At the end, the touched audience gave standing ovations and would not release the group without an encore…” Andrea Schweiger, Frankfurter Rundschau

“The Lady Chapel Singers made a welcome return to Dartmouth Regatta with yet another stunning performance which pulled a record attendance.” Dartmouth Chronicle, Dartmouth, UK

The Lady Chapel Singers, so named because they first sang regularly in the Lady Chapel of St. Mark’s Church, Locust St. in Philadelphia, was founded in 1993. This professional vocal ensemble was dedicated to historic and contemporary sacred music by, for, and about women. Lisa Neufeld Thomas was Artistic Director. Robert A. M. Ross was Music Director.

The group was sponsored through The Women’s Sacred Music Project. They presented concert and liturgical performances. Their repertoire spanned the eighth century to the present, with newly commissioned works sharing the program with ancient songs by Kassia of Constantinople, and Hildegard of Bingen. Concert programs also emphasized cultural diversity, often including American and European works with music from African, Native American and African American sources. The Lady Chapel Singers, as the performing ensemble of the Women’s Sacred Music Project, were part of the International Honour Committee of the Foundation Adkins Chiti Donne in Musica.